Ligers are the biggest cats in the world.

Ligers grow at a rate of 1 kg every second day, thus by the end of their first year, they can weigh up to 165 kg’s. By the time they are 3 years old, they can weigh over 320 kg.

A liger in Miami called Hercules is the biggest cat in the world. He weighs over 410 kg. Hercules is only the biggest living cat. In Wisconsin there was a liger called Nook that weighed over 550 kg. He died in 2007.

Most ligers that have been bred until now were the result of accident. 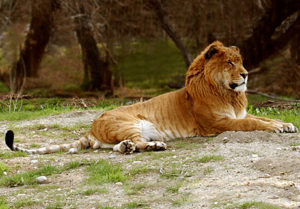 One of the traits inherited from a tiger is the fact that ligers are very good swimmers and love to swim. Lions don’t like water.

Being hybrids, ligers are more inclined to have diseases as cancer and usually have a shorter life span.

The tigress often requires a C-section performed when giving birth to a liger, because the cub is bigger than a tiger.

In the 2004 movie, Napoleon Dynamite, the liger was Napoleon’s favorite animal.